APPOINTMENT TV WAS NEVER TO ATTAIN SUCCESS – THE HISTORY OF OTT

When to start so short a history of OTT? To the surprise of many, there arises too much dispute to say it all began along with the beginning of television itself. It is so as the appointment TV was never to survive in a world where to get information was growing easier and easier. The history of OTT takes its place where we started to have a choice.

The moment when together with others we gathered in front of a TV set for watching the latest episode of, for instance, Beverly Hills 90210, carried along something almost inexplicable. From todays perspective, it was more like waiting for the actors to step on the stage and give their best performance, not for a TV series. The appointment TV did not give the viewers the choice with its twelve or so channels, only on a few of which one could find some entertaining content. All changed when our postboxes began to store something which was called TV guides – magazines that showed the schedule of emissions for the following week and sometimes month. There were the columns of the channels with TV shows listed which almost everybody could hop to; and there were also listed some columns which brought the question: “What to do to watch those blockbusters so recently projected in the movie theaters?” We could have watched almost any top-grossing film on one condition – we had to expand our channel pack by those as yet undiscovered columns from TV guides.

Pay-TV – the gigantic plan and the bigger disappointment

It came like a dream when we could finally watch back and again TV series launched before the time of pay-TV. Who remembers reruns of Friends, Alf, The Simpsons, Ally McBeal and others? Moreover, who remembers the reruns of movies? Depending on the offer one bought from their TV provider, they could have customized their TV package according to preferences – more movies, informative news, sitcoms or sports.

Over time, diversifying the offer came down to making it merely more and more enriched; meaning, if some TV package had seemed customized a time before, now it was almost common. Excluding HBO and other big players, who always cashed more from the viewers, we all had a standard welcoming pack of channels. The race for customization began on a different level. The providers tried to expand their channels portfolio to the maximum, but, to their surprise, not much happened. It became clear that expanding the offer worked for nothing by a simple reason. The viewers’ capacity was limited. Their free time to watch, exclusiveness or preferences pushed them to merely several channels they were interested in. The first pillar of OTT TV took on a settled form – that was the content, not a channel, the viewers really craved. 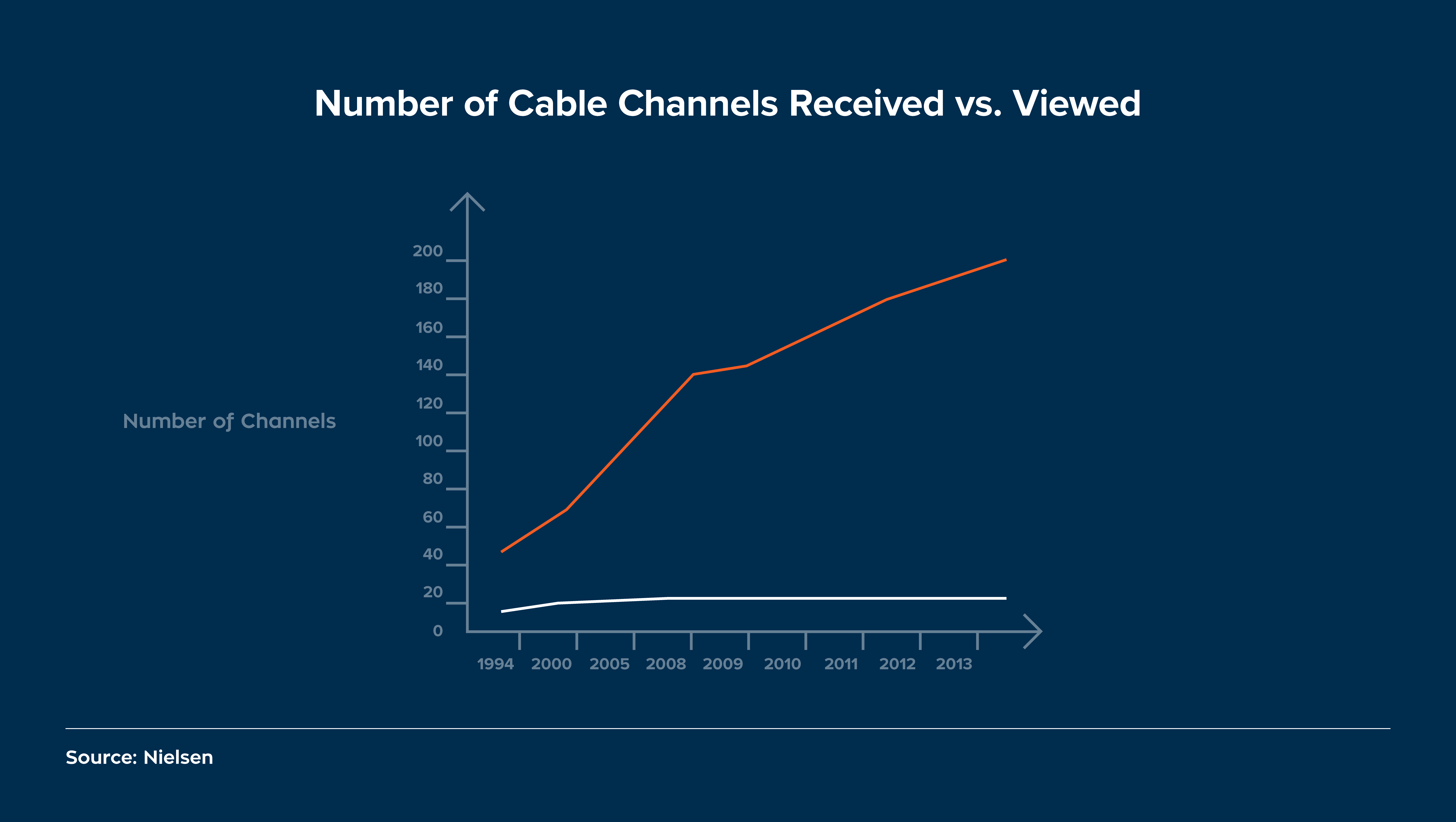 The viewers’ capacity was limited. Their free time to watch, exclusiveness or preferences pushed them to merely several channels they were interested in.

From errand boy to the master of digital entertainment

Efficient content distribution mattered more to the viewers than its richness which was either way impossible to consume. That is how Netflix started delivering movies to its clients. Delivering – literally – via mail. Some might know that, and some might remember, that the company which set the rules on today’s video market, once had been something of an errand boy. Netflix had let people sign up online to the subscription of movie deliverance. The phenomenon is better visible in numbers when one recalls that a typical neighborhood video store in the US had had, on average, about 3000 titles while Netflix had operated on millions (about 16 million DVDs). Each week 3 million DVDs had been rented which had entailed a huge logistic undertaking.

All this happened before MegaMedia Network launched the first on-page streaming video. But no matter whether viewers got their movies in their postboxes or tried to stream it with a horrendous speed, they tasted what choice might be. The switch in the perspective that it is no longer them who waited but the operators and providers was crucial for further market growth. However, what growth are we thinking of if adding new channels was now pointless? The viewers and market satiation steered the trend in a different direction.

The value of the freedom of watching

In 2007, Netflix started streaming flicks with a possibility to watch them whenever the customers wanted to. That brought something unprecedented. The value of watching our loved sitcoms straight after work, while baby feeding or ironing was on spot in the fight for customers' attention. Nowadays, the operators found themselves in times when another gamechanger is being expected. More and more providers annul their licensed content from Netflix to start their own streaming. Imagine after a few years, or even months, the number of applications the viewers need to download to watch what they want to - depending on who produced such and such a sitcom, we will need this particular producer's application. A rerun (but not of our favorite sitcoms) of the situation we once found ourselves in. The value we will soon search for is video aggregation – we will desire having all content in one place. We will never start caring about providers, so they have to find another way to get enough their own airtime. Video aggregation solutions at VECTOR X LABS might be the answer to how to get it, and how to stand in line with the biggest players.