AGGREGATION TO GIVE OTT THE VIM

VECTOR X LABS / News / AGGREGATION TO GIVE OTT THE VIM

So much discussion has been swirling around these black screens we find in our living rooms. It is nothing odd today to know people who limit the use of TV sets merely to the Netflix app and a gaming console where games and music thrives in abundance leaving in blind oblivion many buttons on the remote control. New rules have remolded the telecom competition bringing a box of new terms to learn.

That the change has come, it has been long known. During party small talks we got used to receiving questions if we watch this or that TV series on Netflix or other video platform. It infused into our lives without regard to the technology – the technology had to otherwise regard the trend when in 2005 iTunes offered movies and TV series to download after a charge. It showed many people that streaming legal content reached the point where it can be… convenient. That was also the time for Netflix in 2007 and Hulu in 2008 when these prospecting companies arose.

To disentangle the wires

In other words, the industry’s masters had already thrown all the ingredients to the pot preparing the revolution of how we would watch video eventually. The only thing that was missing, and was supposed to catalyze the perfect mixture, occurred to be nothing else but subscription. Along with the music platforms like: Spotify, Pandora and Apple Music, we realized it went so easier to pay the money and leave all the organization to someone else that we started saying: “Oh, you’ll sure find it on Spotify…” Just like that! We leveled accessibility of paid content to, truth to tell, YouTube. No wonder, in 2015 smart TV trampled the past technology and subscription caught on also in video.

This change of heart, when we had finally taken in paying for streamed video, proved in truth what we had actually been paying for. It was not delivering the new (in 2015 Netflix bought the rights to Friends’ all episodes for an estimated $120m) or otherwise taking us to our favorite titles (think of all these branded Netflix production). We paid for the comfort of a few clicks and infallibility of the system. Thus, the trump card timely thrown in this game carried UX on its face.

There is still plenty of issues that today’s video providers and operators face. Most of them crush against the business ecosystem, or rather the business disarray, like for example split between Widevine and FairPlay DRMs. Or tech problems concerning the outdated devices that, of course, still work but with legacy software.

Following the logic of the recent solutions, smart TV implementation might occur to be quite a challenge as it still tries to engage the old STB users into the today (or Netflix-like) experience. Which is nothing to be questioned – hundreds of millions of old STBs are still in use and the new ones are being continuously distributed worldwide.

And it is nothing to be surprised at, as watching video is all about being accustomed to the way we like doing it. Of all OTT screens it is still TV of the most popularity: 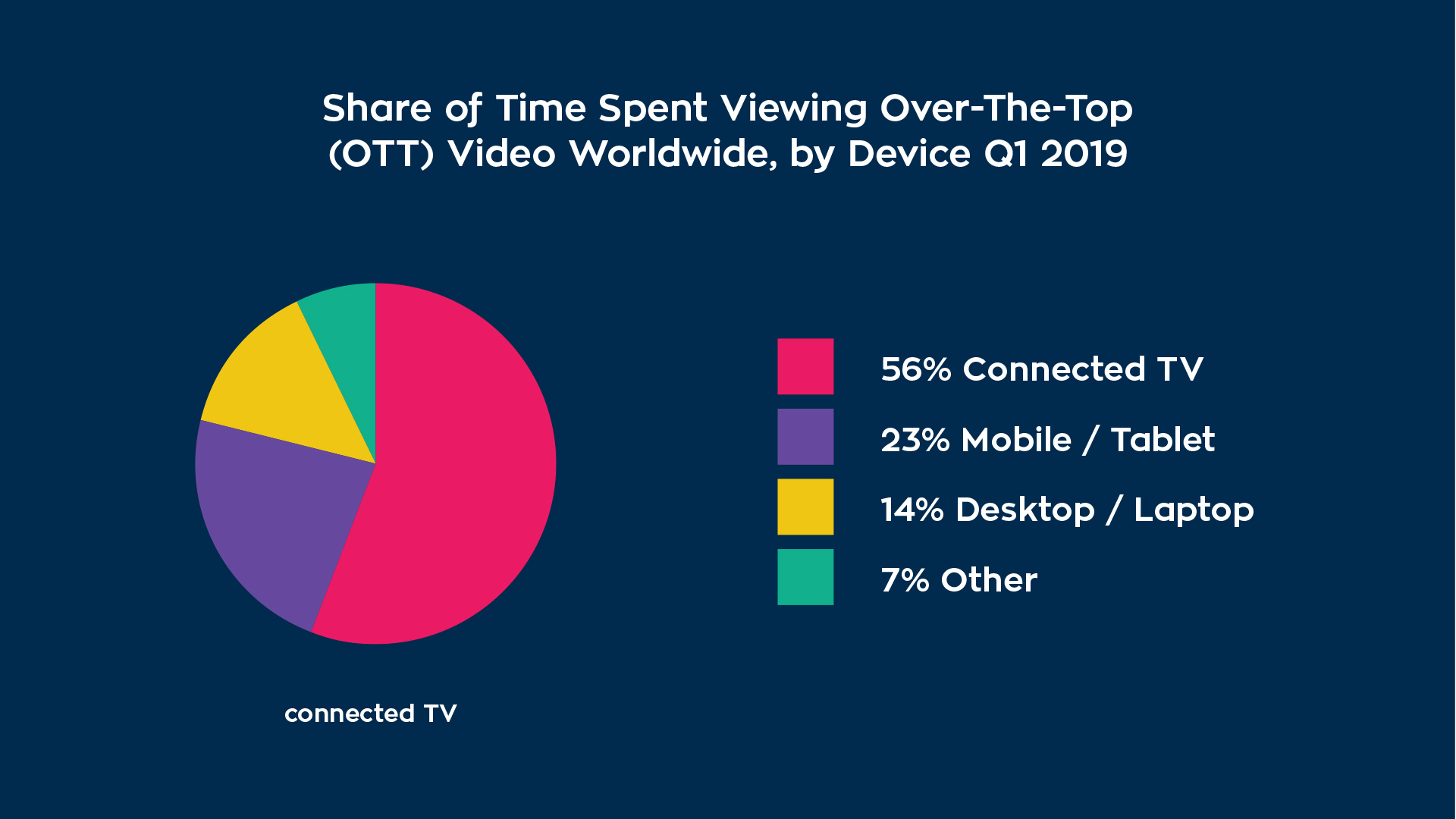 Along with technology development, it has left plethora of different, and very often “one-way”, devices. That is posing the question how to bring the new content and video experience to this world of the entangled old and new wires and fibers…?

Or maybe the question is rather how to skip over this layered infrastructure to get to the viewers? We faced similar problem in the past. Now the story has come full cycle and the answer is again: aggregation – but at a completely different angle.

The new rules of video

Once more, one needs to think it through how to collect video content from different providers and make it equally marvelous in terms of UX. This calls for seeking a unifying technological solution that would lead the operators and providers through the very complicated business ecosystem where, at the end, the viewer meets the complete video experience, i.e. VoD, live and time-shift TV – all combined.

User experience, thus, clearly became the coin of the realm in the telecom world. It defines also the perception of OTT as not only a means of transferring video to your phone but it elevates the whole interaction with the software to a new level. In the end, we pay for the convenience of a few clicks, don’t we? And we are little interested in what happens underneath those clicks – the technology, certification or hardware. From the user perspective, they are there to simply work.

For all the content providers it is about finding someone offering such know-how which would move the tech riddle to their side. Nowadays, very often when a user wants to watch a movie, despite already having a proper app, they still have to download another one to watch a different movie from a different provider. In VECTOR X LABS we know how to switch the plugs for both the provider and the viewer to get to each other whatever TV series we think of.

What is more, it is people and their customs and favorite ways of watching video that calls for integrated user experience. As we, human beings, are choosy, we will always be seeking the most convenient demeanor. The path we go through from the moment we register to Netflix to when we become a settled user might bring quite insightful outcomes: 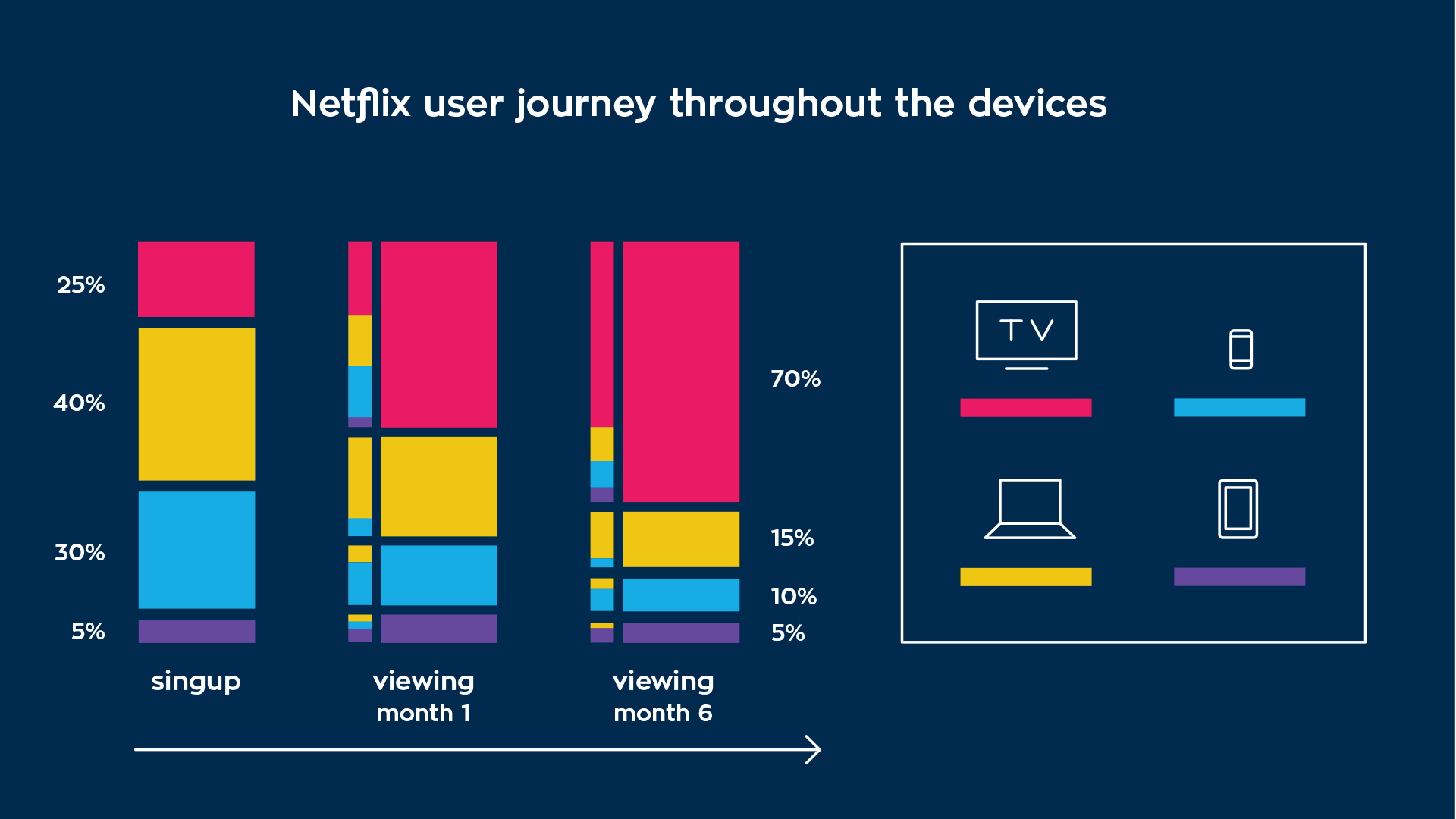 Thus, this is the rule – user-friendly simplicity which should stay integrated with the movie time all the way to the end titles.

For those who produce their own content, the deal has already happened to be favorable. Especially when it comes to a varied video experience including on-demand newly launched TV series as well as live streaming of sport events. The today smart TV comes down to breaking up with being linear – it is no longer only a matter of the movie library.

Viewers are choosy. We all are. This is why aggregating all the content in one place with one interface, which doesn’t need relearning anytime we want to watch a production of a different provider, might be the answer.

Simplicity and convenience is in vogue for long. Now it is time for OTT to reform and take some speed while delivering video experience. Viewers want it simple, light and vivid – easy and intuitive. UX in video has to be fueled by powerful content. The answer is more than obvious that it is all about great aggregation.